On Thursday July 21st 2016 a group from Arun DFAS travelled to Sissinghurst and Scotney Castle.  We are very grateful to Maura Blackburn who has supplied the pictures and prepared this account of the trip: 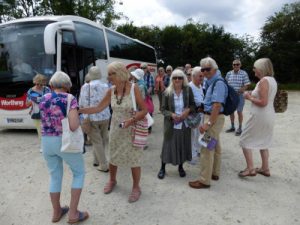 On a pleasant summer’s day we had travelled through the greenest of the Kentish Weald, eventually spotting the mellow brickwork of the Elizabethan tower of Sissinghurst.  It nestles snugly within its Wealden setting, surrounded by its famous gardens. 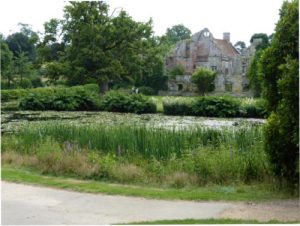 We soon found ourselves amongst the many visitors, including international, who make Sissinghurst one of the most visited gardens in the U.K.  We were spoilt for choice on how to use our time but chose, like most, to visit firstly Vita Sackville-West’s famous white garden. The NT are in process of restoring the garden gradually to Vita’s original designs but already the white hollyhocks and sweet peas were much admired and we were surrounded by a multitude of white flora.
Our more daring members chose to climb the 78 steps up the tower to Vita’s workroom and onto the top for a panoramic view of the estate.  However, we were saved from temptation when an unfortunate tourist collapsed at the top of the tower and it was closed.  So we had a good excuse to make for the Granary Restaurant and a “home grown” lunch.  The fire brigade eventually arrived to rescue the lady. There was still time to visit the library where we we re invited to sit on the comfy sofas and read about the chinoiserie collection and many portraits, including a very striking one of Vita.  Then it was off on our travels again.
A short drive brought the coach to Scotney, it having the advantage of an actual castle on the estate, albeit in ruins.  The C19th house was choc-a-bloc with interesting artefacts, so much so that some members spent all their time there.  However, for me, the winner was the ruins of the medieval castle, set in an idyllic valley, surrounded by a water-lily lake.  As we sat drowsing in the shade in the afternoon heat, fantasies of the Arthurian legends sprang to mind. Should an arm brandishing a sword have appeared from amongst the lilies, we would not have been surprised!
Homeward bound, we agreed the Kentish Gardens of England had fulfilled all expectations.
Thanks to Margaret for managing the logistics in visiting the two houses, including split timings. 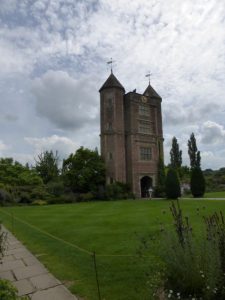 “Salisbury Cathedral is the single most beautiful of structures in England and The Close around it the most beautiful space.”  Bill Bryson’s descriptions were colouring my thoughts as we were arriving and catching tantalising glimpses of the cathedral spire as we neared our destination.  Christopher Roger’s lecture in February had prepared us for the many changes that had happened over the centuries. 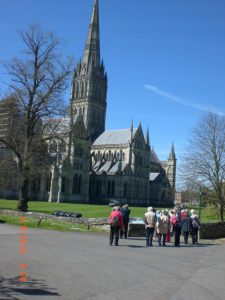 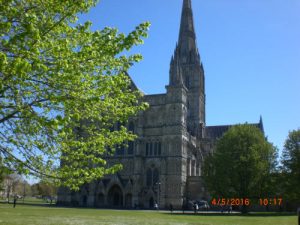 So it was no real surprise to be greeted by a display of very modern wire sculptures as we arrived in the precinct, that seemed in sharp contrast to the medieval and Georgian architecture all around us.  We learnt these were Sue Ryder’s “Lady Hair” and “Minotaur” figures part of the cathedral rolling art programme. (there until July 3rd).  We learnt that her sculptures explore the relationships between animals and the “human animal” with descriptions including Hugging, Conversation and The Kiss. 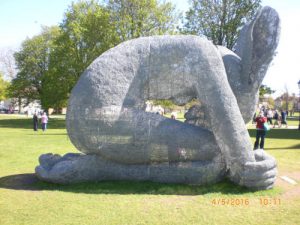 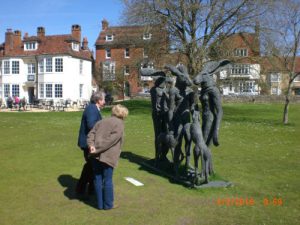 Our day was carefully choreographed around small group guided tours of the cathedral and Arundells, home of the late Prime Minister Edward Heath. We owe a big thank you to Margaret who ensured we were all at the right place at the right time. 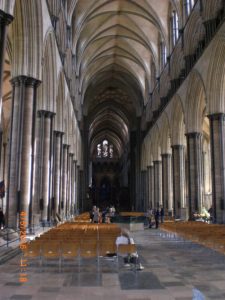 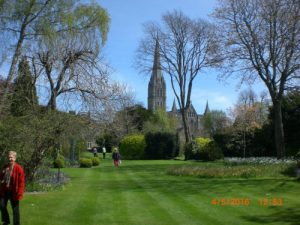 We learnt that the cathedral took 38 years to establish by 1220 with the first spire completed by 1320.  After a series of disasters including destruction during the civil war, the spire now stands 404 feet high being the tallest spire in the UK, with the last 30ft accessible only by climbers on ropes working outside.  There was so much of interest, too many to list, but mention must be made of the 1386 World’s Oldest Working Clock that has ticked 4.4 billion times up to 2013 and continues.

Arundells was a house devoted to fine art, exquisite china and porcelain, music and a photographic history of the era, not to mention a lovely garden sweeping down to the river, with stunning views of the spire. 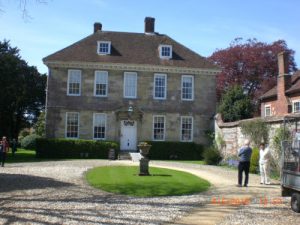 The day would not have been complete without a visit to the Magna Carta exhibition. I was on the back foot because a family member was responsible for transporting one of the priceless copies to a new London location and was not to be impressed by my visit. However, the exhibition was very moving with the Great Charter protected from daylight in its own tented area, being the best surviving copy of four. We were surrounded by informative displays as well as visitors from across the world. You could not but be impressed that the democracy ensconced within the charter still holds good today and is valued across the world. 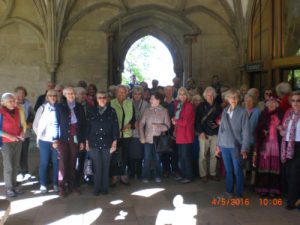 The day ended happily with ice creams on the lawn, amidst wonderful surroundings and enjoying the lovely spring sunshine. A wonderful day and happy journey home!

We are very grateful to Maura Blackburn who has prepared this account of the trip: 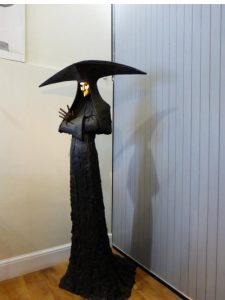 I think it would be fair comment to say that our morning spent at Philip’s studio set in the serene South Downs held a variety of meaning for each of us, lucky to be there, touching as it did upon national identity held within his sculpture and including the processes and emotional responses to the completed work.
As we assembled, quietly excited by examples of his work, I was bumped by a door being opened by a smiling man who I immediately recognised as Philip himself welcoming us into his studio! (for me a never to be forgotten moment). It was the first of a morning full of many surprises.

As we seated ourselves I found myself under the gaze of an unusually benign Prince Philip and we learnt that the following week the studio would be filled with a full size man on horseback commissioned from the Middle East.
For a world renowned and busy artist Philip was very generous with his time, spending most of the morning with us. He took us through his process starting from initial clay maquettes, the sizing up of the metal and wire framework and his use of a range of materials including wax, wood, fibreglass and clay before the bronze casting. We also met his son who carries out the final patination of the bronze work. 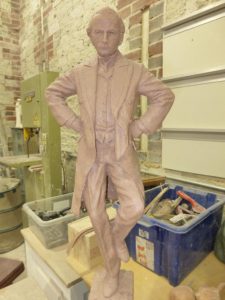 He explained some of his modern pieces had hidden faces so that it is possible to interpret the figures in an individual and personal way.  Among the many commissions he brought to our attention were some that held special significance to him and I expect to many of us.  His figure of Sir Matt Busby was so lifelike it took your breath away and brought tears to Sir Matt’s son.  Philip had to work from black and white photos to produce the wonderful figures of Bomber Command Lancaster Bomber crew that now stand proudly at Marble Arch.  He reminded us of the 55,000 deaths within Bomber Command. 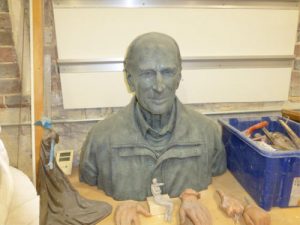 These are just a few examples that Philip presented to us in a warm and unassuming manner that filled his audience with admiration.  So sorry that the numbers able to attend were limited by the studio size.  We have to hope for a further visit at another time. 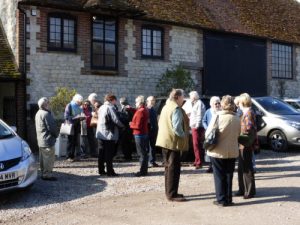 On Thursday July 8th 2015 a group from ARUN DFAS travelled to Romney Marsh to visit a number of historic churches on a guided tour led by John Vigar.

We are very grateful to Maura Blackburn who has prepared this account of the trip: 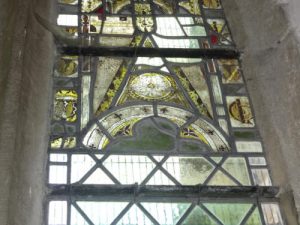 Did you know that, historically, marriages did not take place in church but in the porch of the church, or that priests (or their patrons) were responsible for the upkeep of the altar end, whilst the congregation paid for the rest of the building?  No, neither did I until our wonderful trip to the marshes in July, following John Vigar’s informative lecture concerning the arrival of Christianity in that part of Kent.  All of us lucky enough to spend the day there, led by John, were treated to wonderful pastoral views of the marshes, seemingly little changed in the last hundred years or more. 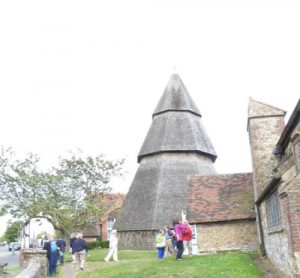 We were surrounded by peaceful meadows teeming with Romney sheep that are linked to the wealthy wool trade that helped fund the many unusual churches, four of which we visited.  Under delicate blue skies the marshes stretched away to the horizon and provided a calm and serene backdrop.  Among the curiosities introduced by John were a church with a triple steeple, like a series of witches hats, housing the bells but standing separate to the church; a rare baptismal font made from individual lead panels depicting the farming year in months with the appropriate astrological signs; a church divided to include a display of historical farming equipment, and much more of interest. We arrived back in Rustington, tired but full of memories of a beautiful part of England that time seems to have overlooked.  Even our coach driver, who had clearly visited many places both here and abroad, voiced his surprise at the special place we had visited.  Thank you Sally for arranging such a lovely day and to all concerned.

Many thanks to Maura and Sue Richardson for supplying the pictures.

The visit to Greenwich on May 12th 2015 was a great success, enjoying fine weather and a guided tour from an experienced guide.  Here are a selection of photos taken on the day: 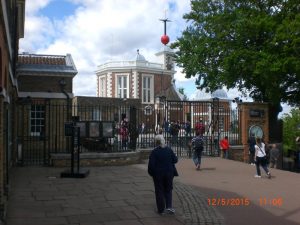 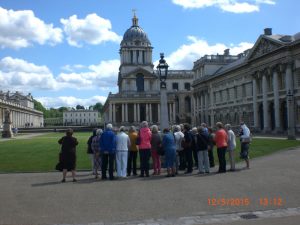